UFC Vegas 64 gambling preview: Building the bankroll with Marina Rodriguez ahead of UFC 281 -
Skip to content 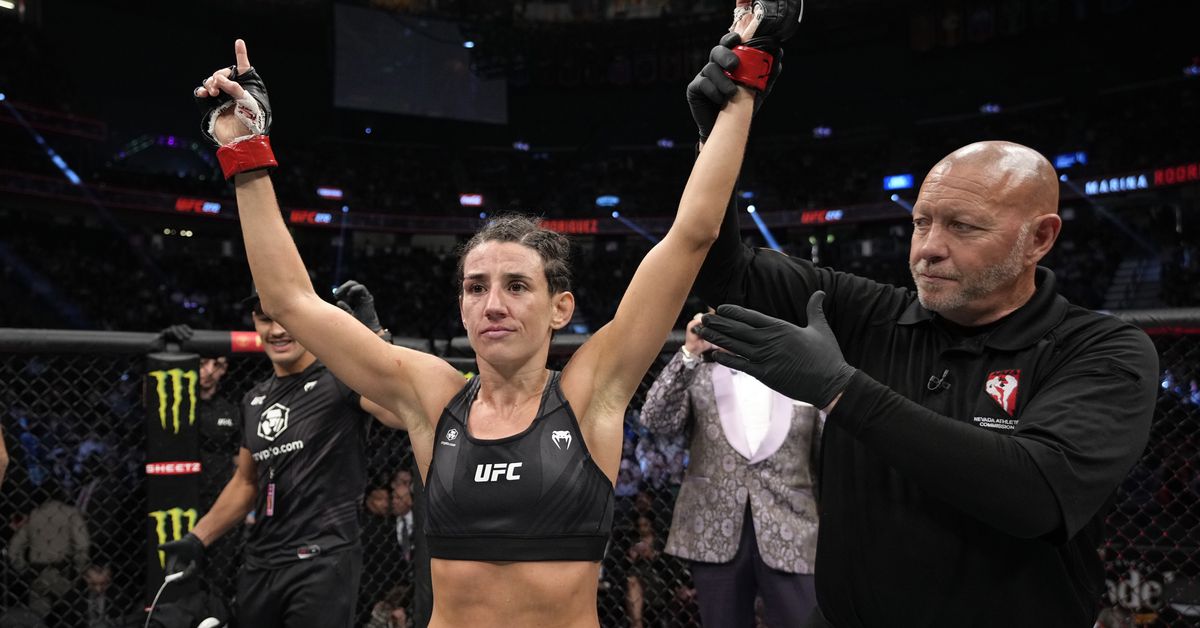 Another week, another UFC card, this time as the world’s leading MMA promotion heads back to the APEX for UFC Vegas 64. Headlined by a strawweight bout between Marina Rodriguez and Amanda Lemos, Saturday’s card is light on marquee fights, but it still serves as an excellent appetizer to next weekend’s UFC 281. And with 12 fights on the card, that’s plenty of chances to lay some bets.

As always, all odds are courtesy of our friends at DraftKings Sportsbook.

I’m a big believer in D-Rod. Perhaps not as a future champion — that may be a bridge too far — but I think he’s a top-10 talent. As such, I picked him to beat Li Jingliang just a couple months back, which certainly paid off for me, albeit in a close fight. Even with Rodriguez taking another step up in competition against Magny, I’m still going to pick him, because he’s the superior boxer of the two and has a great jab that should give Magny problems. Magny is a tough out for anyone, but I don’t think he’ll be able to take Rodriguez down, and so I suspect he’s just going to get outworked over three rounds. A prop bet on Rodriguez by Submission at +275 also intrigues me, but at plus money for the straight shot, I’ll stick with this action.

Try as I might, I simply cannot quit “The Vanilla Gorilla.” Sherman is not a great heavyweight, but he’s not a bad one, and he’s extremely game. Moreover, the man has a stupendously high output for the division, and output that should give him a decided edge of Josh Parisian. A smarter man than I would look at this fight and say, “Heavyweight MMA is unpredictable, I will pass,” but that’s not me. Sherman wanted Parisian as an opponent, and I think he shows everyone exactly why on Saturday, outworking him, probably to a late stoppage victory.

Miranda Maverick and Shanna Young have met once before, three years ago in Invicta, where Maverick submitted Young with a rear-naked choke in under three minutes. Why would things be any different now? Sure, Young has improved, but Maverick has improved even more, and she has an enormous athletic advantage. I think there’s nearly no chance Maverick loses this fight, and it’s tough to envision Young even surviving to the scorecards given their first meeting.

Here are some numbers for you to pitch this bet: Of Minner’s 26 career victories, 22 have come by submission. On the other side, six of Shayilan Nuerdanbieke’s 10 career losses have come by way of submission. Nuerdanbieke is deserving favorite, but if he loses, it’s most likely going to be because he gets caught in transition and tapped out. So with the extra value the props gives to Minner, I like this bet.

Parlay of the Week

If you’ve been following this series for awhile, you’ll know I love a gimmick parlay — they’re just so fun to root for! And I had every intention of simply parlaying the two Rodriguez’s together and being done with it — except D-Rod turned into an underdog and jammed the whole thing up. You never parlay plus money. That’s a rule. So instead, here we are, parlaying both Rodriguez fights to hit Over 1.5 rounds.

And I do think it’s a good bet. For as fun as D-Rod is, he’s not a huge finisher when faced with elite competition, and Magny is very durable. Meanwhile, M-Rod has only one finish in nine UFC fights, and has never been stopped herself.

Parlay these two bets together for -169 odds.

Long Shots of the Week

I’ll be honest, I’m really scraping the bottom of the barrel here. As mentioned above, Maverick should run through Young without much issue. BUT, if she’s going to win, Young is going to need some sort of finish on the feet. She does hail from a karate background and she’s coming off a TKO finish over Gina Mazany, and Maverick has made some overtures that she wants to test out her kickboxing in this fight, so there’s always the chance Maverick fights a dumb fight and Young can capitalize.

Damn. Another losing week. That’s back-to-back in tough outings after a two-month long stretch of success. That’ll teach me to keep doubting Jake Paul, I guess. Fortunately, we’ve got another chance to get back on track this week and build some momentum heading into UFC 281, so let’s get after it.

Until next week, enjoy the fights, good luck, and gamble responsibly!

All information in this article is provided to readers of MMA Fighting for entertainment, news, and amusement purposes only. It is the responsibility of the reader to learn and abide by online gambling laws in their region before placing any online sports betting wagers.