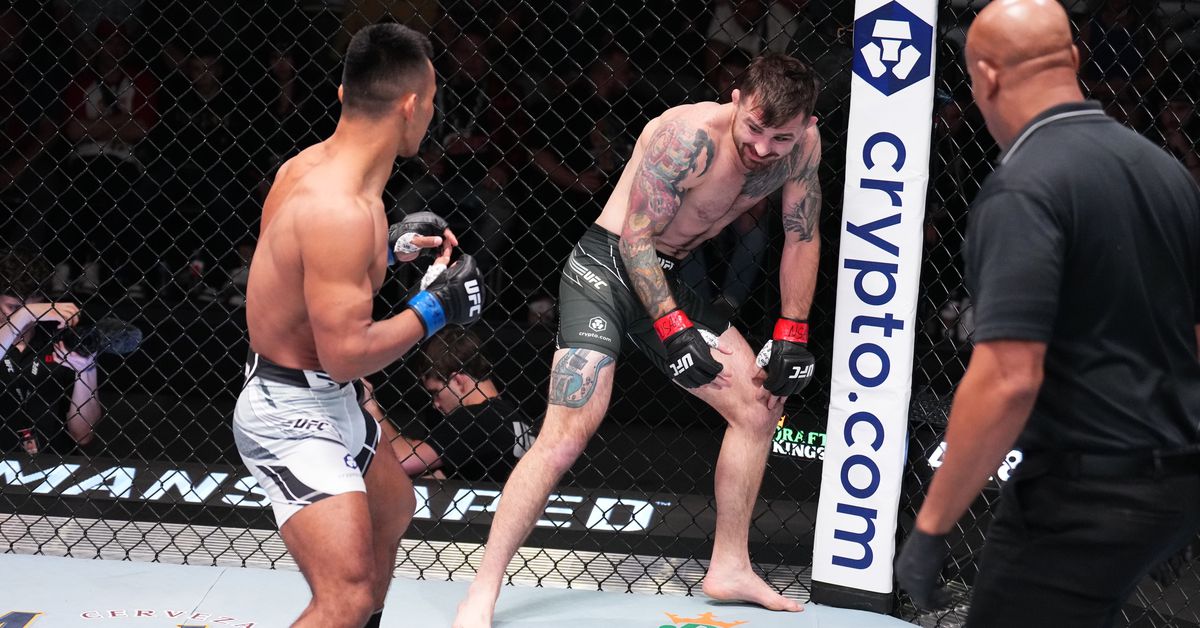 Fans and media who closely follow UFC betting lines noticed some strange late movement ahead of UFC Vegas 64’s fight between Darrick Minner and Shayilan Nuerdanbieke. In the hours before the fight, Nuerdanbieke went from being a -220 favorite to -420. In the aftermath of Nuerdanbieke’s first-round knockout win, an investigation has been launched regarding the pre-fight betting for that contest.

ESPN first reported that U.S. Integrity, an organization that indentifies “suspicious behavior by analyzing changes in betting data against a benchmark of normal betting activity,” reported the irregular betting activity a few hours ahead of the event.

Minner opened the fight by throwing three low kicks with his right leg. He then switched stance and threw a left kick to the body of Nuerdanbieke. After throwing that kick, Minner staggered backward, clutching his left knee. Seconds later, Minner attempted another body kick with his left leg, leaving doubled over against the fence—apparently in a great deal of pain. Nuerdanbieke took advantage of his injured opponent and finished the fight with an onslaught of strikes at the 1:07 mark of the first round. After referee Mark Smith waved off the fight, Minner sat on his stool with his left leg extended.

According to ESPN’s report, not only did late money come in on Nuerdanbieke, but there was significant action on prop bets for the fight to end via knockout in the first round and the under of 2.5 rounds. Before Saturday’s event, Nuerdanbieke had zero finishes in his three previous UFC outings.

While there have been no reports as to what injury Minner had sustained, or who might have known enough about it to place bets against him, it has to be noted that Minner’s coach, James Krause, hosts a gambling podcast and runs a Discord channel focused on betting on UFC fights.

After ESPN’s report, the UFC offered a statement to Yahoo Sports:

“Like many professional sports organizations, UFC works with an independent betting integrity service to monitor wagering activity on our events,” the UFC statement read. “Our betting integrity partner, Don Best Sports, a leading global supplier of real-time betting data for North American sporting events, will conduct a thorough review of the facts and report its findings. At this time, we have no reason to believe either of the athletes involved in the bout, or anyone associated with their teams, behaved in an unethical or irresponsible manner.”

In mid-October, the UFC updated its code of conduct to prevent fighters from betting on UFC fights. The memo also noted:

“Athletes should also be aware that in most states these same prohibitions apply to some or all of (i) relatives living in the same household as an athlete. (ii) an athlete’s coaches, managers, handlers, athletic trainers, medical professionals and staff and (iii) any other person with access to non-public information regarding participants in any MMA match.”

As a way to compare movement of betting lines on fight day, the second most significant change for the UFC Vegas 64 fight card was in the Miranda Maverick vs. Shanna Young fight. In that contest, according to BestFightOdds, Maverick started the day as a -742 favorite and closed as a -827.