UFC 281: Adesanya vs. Pereira main card preview - Poirier looking to get back on track -
Skip to content 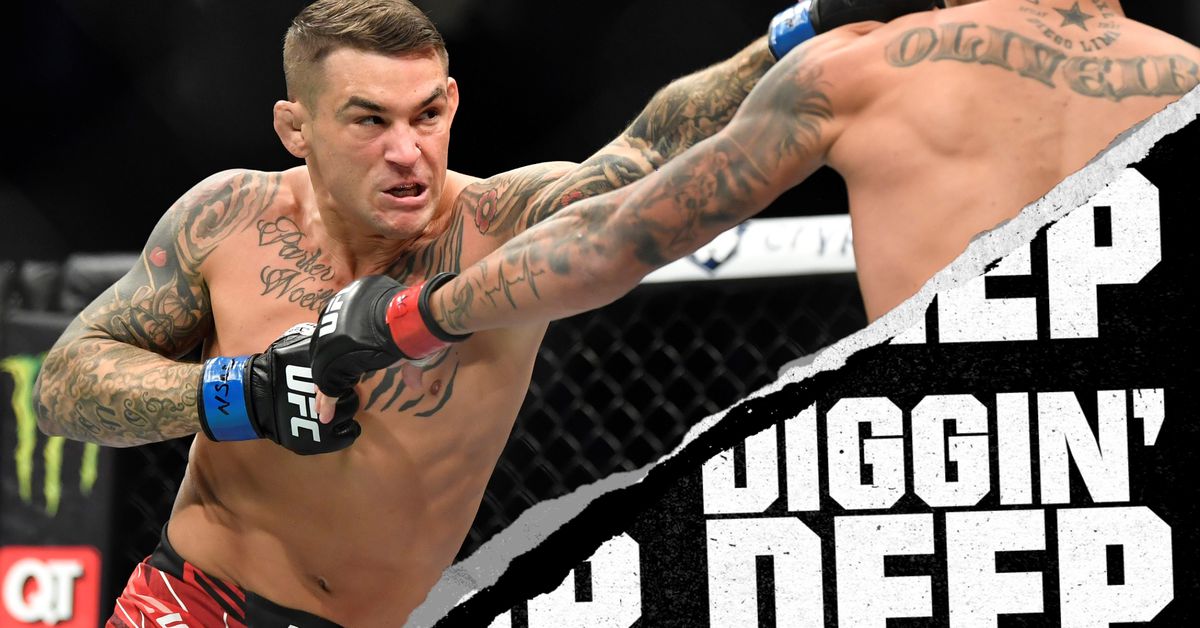 The non-title fights of UFC 281’s main card may feature the fan favorite fight on the card. For whatever reason – there’s several possibilities that could be speculated, but I’m going to hold off on doing that — Israel Adesanya hasn’t captured the imagination of audiences in the manner the UFC had hoped. However, boosted by his trilogy with Conor McGregor, Dustin Poirier has managed to elevate himself to a level most thought was out of reach for him. Thus, he has the ability to say yes or no to just about any fight he wants… and he said yes to former Bellator lightweight champion, Michael Chandler. Given Chandler has yet to turn in a narcoleptic inducing contest since signing with the UFC, it’s hard to believe he and Poirier won’t turn in a showing that is likely to deliver an extra $50K to one or both of them. Plus, we’re getting the alleged retirement fight of the legendary Frankie Edgar. Does he have enough left in the tank to turn away Chris Gutierrez? The main card curtain jerker between Dan Hooker and Claudio Puelles offers high level of intrigue as well.

If there is proof that the elite fighters of Bellator are capable of hanging with the elite fighters of the UFC, Chandler is the best proof out there. Even though he only signed with the UFC after he had already left his prime, he’s had competitive contests with some of the best fighters in the UFC’s lightweight division. Sure, wins that he has picked up haven’t come against the elite – no disrespect to Tony Ferguson, but he was clearly on the downside by the time he faced Chandler – but Chandler had his moments against Charles Oliveira and Justin Gaethje. Had things gone just a bit differently in each of those fights, Chandler could be undefeated in the UFC.

Thus, while everyone is overwhelmingly going to pick Poirier – while I’m giving it away, it’s not like it’s a surprise – the memories of Chandler’s earlier UFC losses should provide some hesitation for anyone thinking about putting money against him. Chandler has proven he still has an explosive burst and the power to end a fight in an instant. Hell, against Ferguson, he proved he’s even diversifying his attack, blasting the seemingly indestructible former interim champion with a front kick.

What does appear to be a concern with Chandler is his gas tank. Thus far, only one of his UFC contests has gone the distance and he was drained by the time the third round came around. Unless Chandler can get an opponent down early in each round, he’s unlikely to win rounds based on points. Sure, he can secure an explosive moment with a knockdown or something, but it’s better to get the finish in those moments.

The question about Poirier is how durable he is and if he can stuff takedowns. Given Poirier has been considered to be a plus wrestler, I’d say his takedown defense is probably overrated. That said, it isn’t crap. The thing is, I struggle to say he’s fantastic when Hooker has taken him down several times in a contest. Nevertheless, at the very least, Poirier is difficult to hold down. In other words, winning rounds doesn’t appear to be a route for Chandler. So how about Poirier’s durability?

Since moving to lightweight in 2015, only Michael Johnson has put Poirier away with strikes. Hell, he’s the only one who has officially knocked him down too. As Poirier has matured, he has made defense a much higher priority. Hell, he’s even been able to make defense an offensive part of his attack, checking McGregor’s kicks to the point it led to McGregor breaking his leg… and perhaps even leading him out of the UFC for good. That isn’t even touching on Poirier’s boxing. As he has aged, Poirier has added power and strength, making him even more dangerous as a boxer than he was when he burst into the lightweight division with three KO’s in his first four fights. Hell, he’s even more of a technician now too.

The bottom line is Poirier checking McGregor’s kicks in many ways exemplifies the fighter Poirier has become. He’s no longer the full-throated aggressive striker he was in his early years. He can be that fighter when he needs to be, but he has become one of the more calculating fighters on the roster at this point. Poirier has a plan going into every fight and doesn’t allow his emotions to override that plan. McGregor tried to get into his head the way he did the first time they fought many years ago and he couldn’t do so.

That’s what leads me to think Poirier has this in the bag. Many are concerned Poirier is going to have issues getting motivated to continue fighting now that he has come up short fighting for the undisputed lightweight title twice now. It’s going to be hard for him to get that third opportunity. However, with Islam Makhachev the new champion, that opens a new door for Poirier. Throw in that Chandler had to throw shade at him to get him motivated enough to take the fight and I think Poirier can find the fire he needs to continue burning bright. Besides, while Poirier has more fights under his belt, Chandler is the older fighter with years of amateur wrestling experience under his belt to add to his wear and tear. I wouldn’t discount Chandler finding a stoppage, especially early. But if it’s out of the first round, I have a hard time seeing Poirier losing. Poirier via TKO of RD2

Nobody likes to see the end of the road for a legend. While it shouldn’t, it often taints our memories of what they once were, especially if they hang on for too long. For instance, Ken Shamrock is often thought of more often as the has-been he developed into as opposed to the legit badass he was in his prime. No one is thinking of Edgar in those terms, but if he didn’t call it quits soon, we were beginning to wonder if that was the path he was going to go down.

To be fair to Edgar, he has held far better than other men his size have as they approached his age. Though it was controversial, it was just two years ago he picked up a win over Pedro Munhoz as he dropped down to 135 for the first time. Hell, if he could have held on another 70 seconds, he probably would have taken a decision over Marlon Vera. But while he held out longer than most, he is now 41 and has had his clock cleaned in four of his last seven fights… after no one could previously do so.

Given that his chin is demonstrably gone, he’s going to want to wrestle as much as possible against Gutierrez. Looking purely at the numbers, you’d think that wouldn’t be the easiest thing to do. However, there’s three things to keep in mind. First, Gutierrez hasn’t faced the highest level of competition, his best win probably being Danaa Batgerel. Second, Gutierrez hasn’t faced many opponents who have wanted to put him on the mat, most of them being strikers. And third, the one opponent who looked to ground Gutierrez early and often, Cody Durden, did so. That Durden took the contest on short notice – sapping his gas tank – and is a natural flyweight doesn’t help Gutierrez’s cause.

Perhaps I’m overlooking the strides Gutierrez has made. He has always been an effective striker on the outside who has largely relied on spacing and distance as his most effective form of takedown defense. Plus, he’s opened up his offense far more than he had previously shown, scoring a spinning back fist stoppage over Batgerel after largely being a point fighter up to that point. Then again, putting it that way is overlooking his low kicks as he is one of the few who has delivered a legit stoppage via leg kicks.

What doesn’t appear to have dissipated for Edgar is his stamina. He can still go hard for a good 25 minutes. Given this is a 15-minute fight, he’s not going to gas in the least. However, Gutierrez has never had stamina issues either, so it’ll be less of an advantage for Edgar as opposed to a neutralizing factor. That said, while Edgar isn’t as quick as he was in his prime, he still moves nonstop. Gutierrez isn’t slow, but he’s also never been known for his speed. There’s always the chance Gutierrez continues to open up his offense as his confidence gains, but I also believe the UFC set up Edgar to go out on a win. Gutierrez can knock Edgar out, but he doesn’t have the type of power that Edgar is particularly susceptible to. The legend utilizes his wrestling to go out with a win. Edgar via decision

There wasn’t anyone who thought Hooker returning to featherweight was a good idea. He had clearly grown further into his frame since moving up to lightweight and had endured some hellacious wars in that time. Dehydrating himself beyond what he had done in several years in combination with his weakening chin seemed like an obvious bad combination.

Fortunately, it only took one fight for Hooker to recognize the error of his ways and returned to lightweight in a hurry. Plus, the UFC is doing him a favor by pitting him against an opponent who isn’t going to test his chin in the manner that it has been tested in recent years. Nobody is going to compare the punching power of Puelles to the likes of Poirier, Chandler, or Arnold Allen. Thus, given Hooker’s durability – formerly a strength of his – has become a major question mark, it looks like the UFC is setting Hooker up for success.

Perhaps I’m not giving Puelles enough credit. The youthful Peruvian does possess some power and has the fundamentals down, but it’s on the mat where he’s truly dangerous. In an era where leglock specialists are a dying breed, Puelles has found a way to make that work for himself, having secured three of his five UFC victories via kneebar.

Then again, there’s a bit of an asterisk to Puelles victories. Not that he didn’t deserve them or they were a fluke. It’s just that he was facing opponents who had no qualms about playing around on the ground with him. Whether it was a lack of respect for Puelles or overestimating their own abilities doesn’t matter. Hooker is unlikely to make that mistake. Puelles has made major strides as a wrestler, but he’s still a far cry from being the type of bulldozer that has found success in getting Hooker to the mat. Only Islam Makhachev and Poirier have succeeded in putting the Kiwi on his back.

This is a pretty simple fight to break down. If it ends up being a kickboxing contest, Hooker easily wins. If it’s a grappling contest, Puelles will get his hand raised. Hooker has faced a murderer’s row of opponents and has held his own with a large swath of them. Puelles has impressed since dropping his UFC debut, but he’s also faced significantly lesser opponents than Hooker. Given fights start standing and Hooker doesn’t get put on his back easily, I see him snapping his current losing skid. Hooker via TKO of RD3