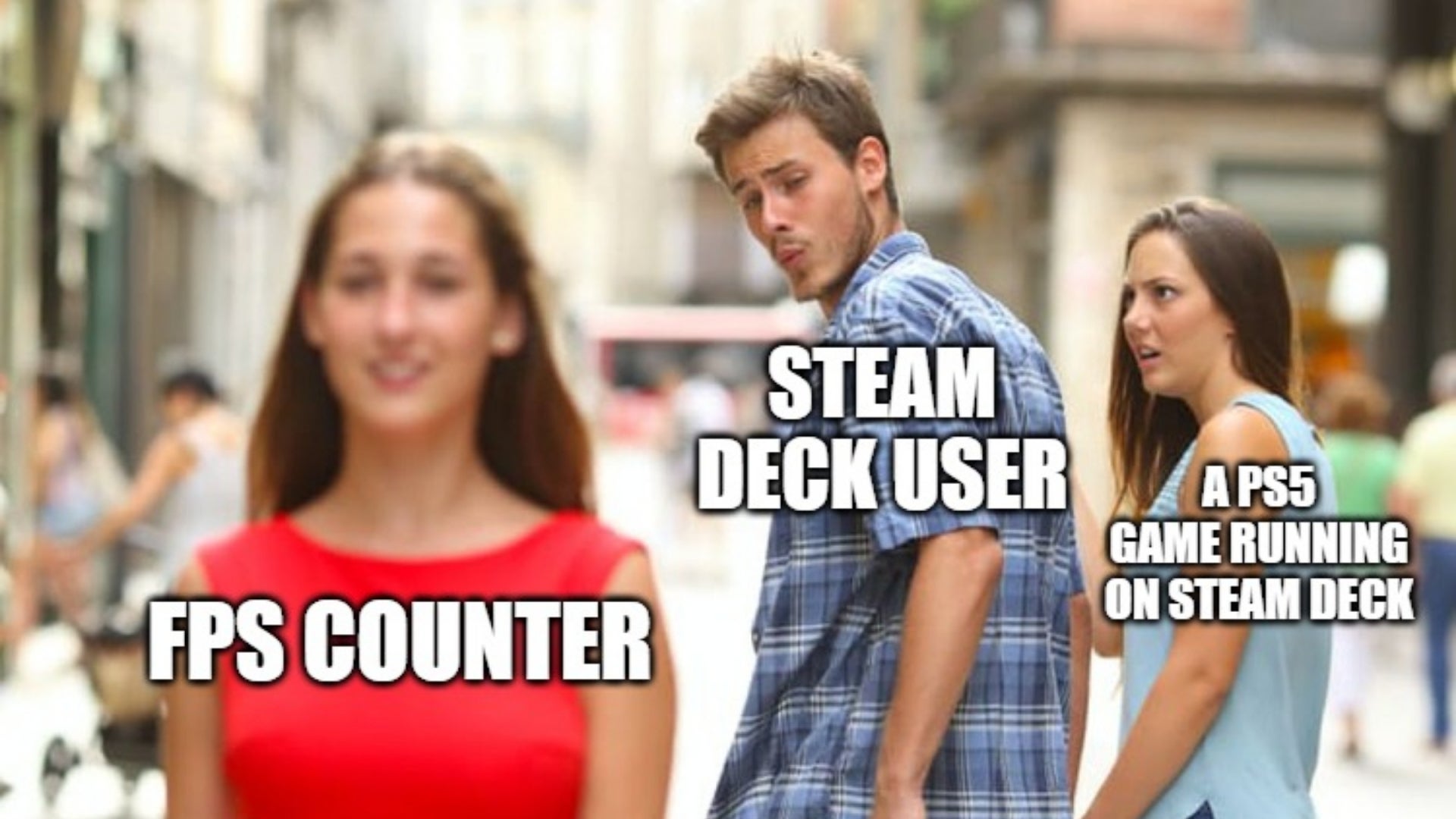 I’ve owned a Steam Deck for about a month now. As a device that costs more or less the same as an OLED Switch, it’s absolutely incredible – at times rather magical in a way only proper high-end tech can be. I love being able to play most PC games from the comfort of anywhere in my house, even if the battery takes a bit of a beating in more demanding titles, and my decision to cheap out on SD card storage size bites me on the arse practically every day.

What I don’t love is how long I spend tinkering in menus in an attempt to improve the little number I have in the top left corner of the screen. The FPS counter on Steam Deck is taking over my gaming life. I hate myself for ever letting those evil digits into my house, but there’s seemingly no going back now.

Let me paint a picture of why the Steam Deck letting me display stats over a game is a problem for someone like me. Step into my time machine as we avoid Morlocks and wind up in the mid-90s. As a child, I was pretty obsessed with PCs. Firstly, I wanted one. This was achieved via great sacrifice from my parents. With a PC in the house (connected to a slow and noisy Dot Matrix printer, FYI – watch a YouTube video about one if you’re none-the-wiser), the world of PC gaming was opened up to me.

A few years later I was buying, reading, and “marking” the likes of Computer Shopper and PC Plus for the latest hardware news and deals. These phone-book-sized mags (about equal to a large squishmallow in modern money) were half-buyer’s guides, half-adverts, and I loved both sides equally. I’d read about the new processors, graphics cards, sound cards and so on one month, then work out how much I’d need to spend to buy them the month after. Of course, my buying power was somehow even worse than it is now in Tory Britain, but with some careful buying and selling I was able to get pretty big into PC building and upgrading.

Once you’re into that world you’re obviously also into tweaking and benchmarking, which is where my love of PC gaming started to fall apart. As I grew older my free time ebbed away, so any tinkering was using up all my actual gaming time. Soldering a processor to achieve a better overclock was essentially up there with being Iron Man or something. These tasks gave way to just playing games on consoles, where I simply didn’t (couldn’t) worry about that stuff.

Fast forward to now. I have the Steam Deck. I kind of knew what I was getting myself into when I bought one, but it’s amazing how quickly I’ve fallen back into the hobby-ruining habits that forced me away from the PC platform many years ago. Here’s a tip: don’t turn on the Performance overlay on the Steam Deck.

At its basic level you simply get a frame rate counter in the corner of the screen. Harmless enough you may, naively, think to yourself. I was there just a few weeks ago, enjoying the number. Don’t believe your own lies. Turn this on and you’ll start down the road to misery. Switch up through the more advanced performance display options and your eyes won’t be able to move from the stats – a car crash drawing your gaze as you motor onwards and inevitably back-end the car in front. Only that’s no car, it’s your own happiness.

“You bought a PC” I can hear people shouting, and yeah, you’re right. I did. I just kind of thought the whole thing would be more consumer friendly, not a notch or two above a Raspberry Pi. That’s clearly something I’ve said to get a reaction (the Deck is at least three notches up from the Pi in terms of user-friendliness), but if you’re coming to the Deck from the background of console gaming, just prepare yourself.

You could just get on with things and just accept what comes your way. Download, play, done. Frame rates be damned, power consumption and battery life thrown to the wind… but it’s hard to do this. A graphical menu option change here, a refresh rate limit setting there, a power consumption tweak to extend the battery life by the same amount of time you used to make the tweaks. All to get that god awful number in the corner to do nothing. Just to sit there, not moving at all.

Steam Deck is a skittish device. Some games straight up don’t work, some claim to work but run badly, and yet some work so well you won’t believe your eyes. My first month with it has been quite the journey. Not for a second do I regret buying a Steam Deck. I do, however, regret the time I spend tinkering and not playing, and the fact that I know I’ll neve be able to stop.