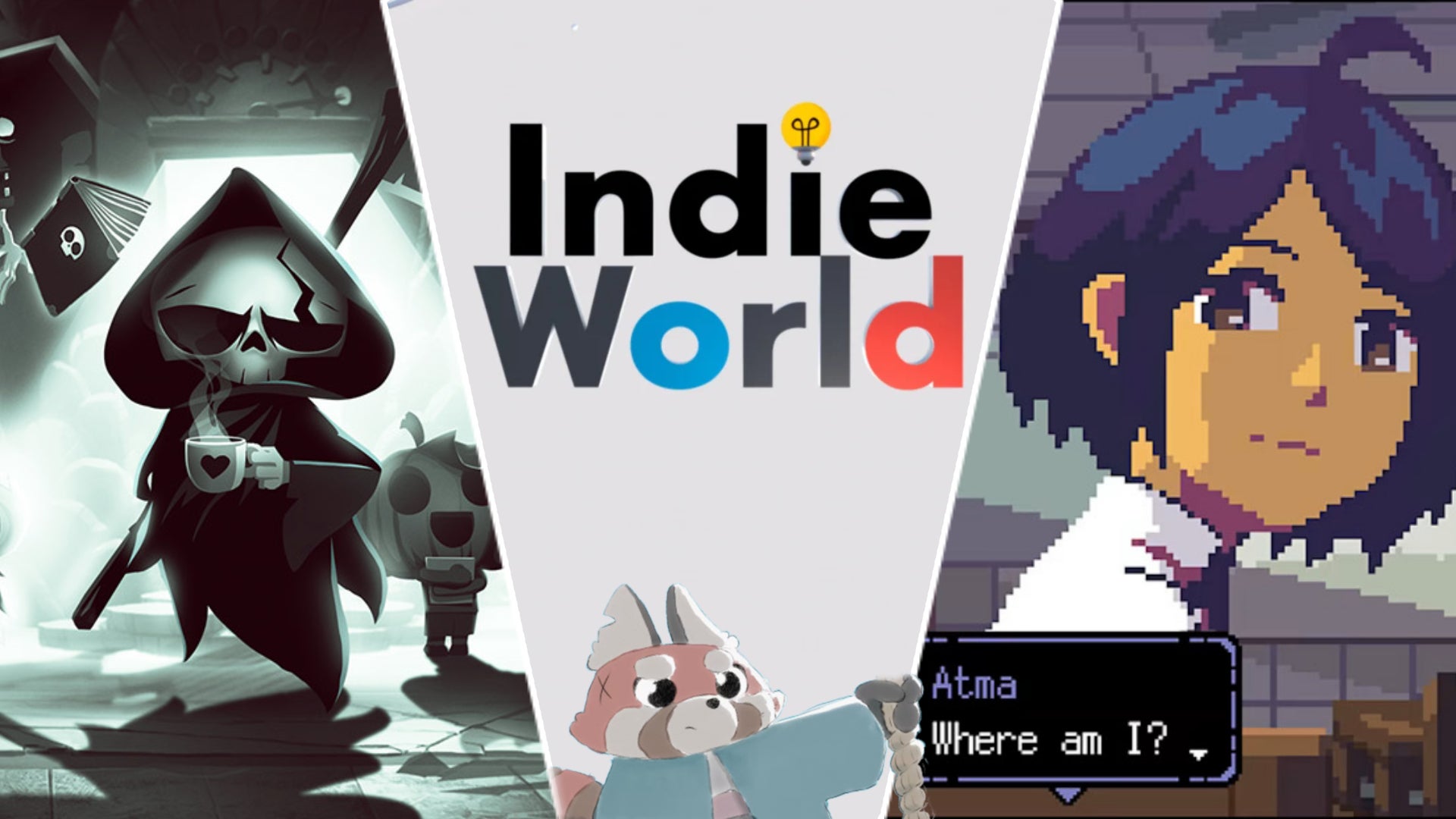 Nintendo shared its most recent Indie World Showcase just yesterday (November 9), and with it came an incredibly varied line-up of simultaneously interesting and adorable games. All of which will be arriving on the Nintendo Switch console during 2022 and 2023.

We’re frankly spoilt for choice when it comes to upcoming indies to pick from. There’s roguelikes, adventures, puzzles, narrative games, and so much distinct art to check out. So, without further ado, here’s every game shown off at Nintendo Indie World.

Catch up on the Nintendo Indie World Showcase for yourself here.

The star of the show arguably had to be Sports Story, which is a sporting RPG that follows on from the 2017 title, Golf Story. Now, you can continue as you were and focus on being a golfing pro, or you can try your hand at football, tennis, cricket, BMX, and plenty more. In addition, Sports Story isn’t solely about your athletic skill; you’ll also be exploring ruins and dungeons, heading to the mall, and taking part in mini-games while getting to know a wide array of characters.

A Little to the Left – Arriving Today

A Little to the Left appears to be another game for cat-owners, or for people like me who yearn to have a cat but can’t bear real responsibility over a living thing. In the game, you’ll be solving short, satisfying puzzles around your home, getting things in order while life (and your very mischievous cat) get in the way.

Here’s the trailer for A Little to the Left.

A co-op adventure that tells the emotional tale of an unlikely friendship. In this black and white game, Blanc sees a wolf cub and fawn come together to help each other find their way back home, with each cute character having their own unique strengths that’ll aid them.

Blanc is also entirely text-free, and can be played co-operatively both online and locally, making it even easier to pick up.

Rogue Legacy 2, the sequel to 2013’s Rogue Legacy, arrived on PC in 2020. Now, the roguelite platformer is arriving on Nintendo Switch as of today, alongside the Fabled Heroes update. With this, there’s a dozen classes for you to try out in the vibrant 2D platformer as you attempt to maximise your runs, gather your riches, and repeat.

Botany Manor sees you taking on the role of retired Arabella Green as she takes care of a 19th century manor. Throughout, players will be solving plant-based puzzles around the manor and forming their own collection of Forgotten Flora. Perfect for anyone who loves winding down with puzzles and plant pruning.

GOODBYE WORLD follows two friends and game developers as they try to conjure up their next idea. As you explore the retro-inspired platformer and solve puzzles, you’ll become privy to the daily struggles of these two characters as they attempt to not only create their game, but make ends meet. Will their friendship survive?

Learn what GOODBYE WORLD is all about right here.

While I’m quite clearly very excited for Sports Story, Aka perhaps has to be the next game on my list from Nintendo Indie World. Playing as retired warrior and red panda, Aka, this small game is all about finding inner peace. Navigating the island paradise, Aka has this jovial world at his fingertips; he can nurture flora, craft a shelter, explore mountains, feed baby dragons, and more.

What’s more, you’ll be meeting up with the ghosts of Aka’s past during their journey, too.

Take a look at the trailer for Aka.

Dordogne focuses on Mimi, a girl that spent much of her childhood in Dordogne, France. In the game, Mimi returns to her late grandmother’s home, and using a series of letters, secrets, and more, Mimi finds that there’s a lot worth uncovering.

Players can skip between the past and present, exploring Mimi’s memories and current experiences, ultimately unravelling more about her relationship with her grandmother.

ONI: The Road to be the Mightiest Oni – Arriving March

ONI: The Road to be the Mightiest Oni is heavily inspired by Japanese folklore, and it shows. Throughout the 3D action game, you play as Kuuta, an incredibly cute demon warrior looking to defeat even more ancient demons.

Kuuta also joins forces with Kazemaru, who you can control simultaneously on a single Joy-Con controller. ONI doesn’t necessarily seem to be my thing, but the colourful nature of it and the fact that Kuuta looks like an angry, horned Wooper has me sold.

Venba is set in the 1980s and sees you helping an Indian mother that has recently immigrated to Canada. Throughout the wholesome, narrative journey, you’ll be helping this mother reconnect with her heritage by assisting her with cooking some delightful-sounding South Indian dishes.

It looks to be a touching story of love, loss, and memories as you help this person reconnect with their past and help to restore old family recipes.

A Space for the Unbound – Arriving January

A Space for the Unbound is a slice-of-life adventure game with a gorgeous pixel-art style, so, I’m already obsessed with it.

Set in the ‘90s rural Indonesia, this game has you unravelling the story of a boy and a girl, and their relationship. The girl also happens to have supernatural powers, which eventually throws a spanner into the works and forces these two characters to uncover secrets and take on the end of the world.

Have A Nice Death – Arriving March

Step into the shoes of Death himself in this 2D roguelike that is entirely hand-drawn. In Have A Nice Death, you’ll be exploring Death Incorporated’s procedurally generated departments while using weapons, spells, and curses as you try to round up your rogue employees who are stealing souls from Earth.

Take a look at the trailer for Have A Nice Death here!

You might be thinking that that’s a lot of games. Well, there’s even more. Pepper Grinder is an action-adventure title that has you using your Grinder to take on the role of a spicy treasure hunter. Then, there’s also Once Upon a Jester, which looks like a rather wacky fantasy adventure following two friends that are up to no good.

We’ll also be seeing Inscryption, the perfect blend of roguelikes, deckbuilding, and psychological horror, coming to Nintendo Switch in December. Joining it will also be Wobbledogs Console Edition in November, which is some sort of pet simulation title that looks strange, albeit satisfying. On top of that, there’s Desta: The Memories Between making its console debut, which is a character-driven roguelike with… a metaphorical ball game involved. Interesting.

In May, WrestleQuest will also arrive on the handheld, allowing players to live out the pro-wrestling dream. And for those who fancy reliving a story that doesn’t involve pro-wrestling, there’s Storyteller arriving in March. This puzzler has players telling their own tales, from Shakespearean tragedies to supernatural fantasies.

Heading into summer of 2023 now, WORLD OF HORROR will be arriving on Switch. This is a 1-bit roguelite RPG that, as the name suggests, is laced with horror and inspired by Japanese folklore. Now, finally, perhaps one of the more epic games coming to Nintendo is Curse of the Sea Rats. This hand-drawn adventure follows a bunch of swash-buckling rats, and is what you could call a ‘ratoidvania.’

That’s (finally) it for Nintendo Indie World. Which games caught your eye, and which ones are you most excited for? For me, Sports Story, Aka, GOODBYE WORLD, and Blanc are very much must-buys.