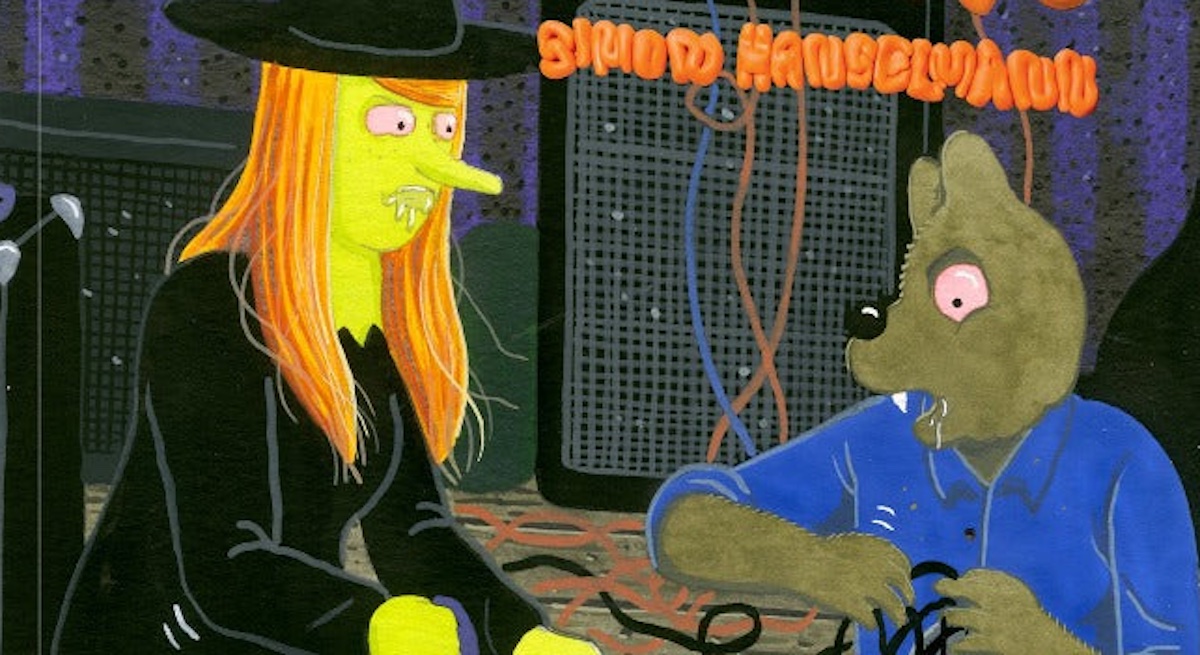 This review contains spoilers for Below Ambition, and pretty much every other Megahex book (and the Crisis Zone 2022 Action Calendar).

In Below Ambition, the relationship between Megg the witch and Werewolf Jones takes the main stage, framed through their participation in their band Horse Mania. Devoted readers of the work of Simon Hanselmann will already be familiar with the band, but not to the degree or depth that this deceptively slim volume digs in.

As comparisons are inevitable, let’s get it out of the way up front: Below Ambition is a departure from Hanselmann’s second most recent book, Crisis Zone.

From March 2020 through December 2020, Hanselmann posted an almost-daily update to his then-current comics project, Crisis Zone. The comic was eventually awarded an Eisner and described by the hoity-toity New York Times as “the first great work of pandemic fiction.”

But before all that, in the midst of 2020 lockdown, Hanselmann’s Instagram had already garnered a devoted cult following – and one that wasn’t necessarily already familiar with Hanselmann’s work. While Crisis Zone takes place on a different timeline than the main continuity of the Megg, Mogg, Owl, and Werewolf Jones stories that began in Megahex, it utilizes the same cast of characters, and this means that (like any multiversal tale) there are echoes across the universes.

These echoes made it clear that many members of the 2020 Instagram audience weren’t familiar with the some of the established continuity points in the “original” timeline. These included reveals like the fact that Owl has the ability to fly, or that – when forced into sobriety (and it usually is forced) – Werewolf Jones returns to a human form (either “Warehouse Jones” in Bad Gateway, or in Crisis Zone, “Jailhouse Jones”).

The surprise in the Insta comments when these developments transpired demonstrated that much of the readership had not been previously acquainted with Hanselmann’s work. So it stands to reason that they didn’t see the impending arrival of a climactic plot point that those of us more familiar with Megg & Mogg saw coming: the fatal outdoor overdose that would kill Jones come Christmas.

In Crisis Zone, Hanselmann resurrected Jones and threw him headlong into the pandemic. The ensuing chaos riveted everyone from Insta users to Eisner judges to the posh cunts at the NYT (deadname this, chumps).

But in the main Megg & Mogg timeline, where COVID isn’t addressed, it’s been established that Jones ODs in December of 2017 (see: “Xmas 2019,” collected in 2020’s Stems and Seeds). Below Ambition returns us not just to this original timeline, but (excepting the final story) to a point in the timeline before even Bad Gateway (and by extension, before the presumably still forthcoming Megg’s Coven). This means it’s essentially an installment to the “expansion books” of the Megahex storyline, alongside Megg & Mogg in Amsterdam and Other Stories and One More Year.

Where Below Ambition seriously distinguishes itself from these other entries is its laser focus. The seven stories contained within all center on Horse Mania and the creative and personal relationship between Megg and Jones. Although supporting characters like Mogg, Owl, and Booger do appear in the book, they have extremely small roles: this is all about Megg and Jones, specifically.

While individual stories in preceding volumes may have centered the pair, this book represents a more direct examination of the duo than we’ve seen in those previous outings. Furthermore, with the possible exception of Bad Gateway, this may be the most focused volume yet in terms of narrative, with each of the seven stories forming a very clear arc.

Beginning with “Practice” and then heading into “House Show,” “Local Bar,” “Heckling,” and “Interstate Tour,” the book depicts a pretty clear narrative arc for the musical duo. The penultimate story, “Homo Train,” shows how the experiences of the whole gang during their days of halcyon youth had an effect on the lyrics written by the band, adding a degree of self-reflection to the band’s antics.

However, it’s the final story, “7”,” that adds a new dimension to the relationship between the pair, thanks in large part to a time jump that takes us further into Megg’s future than we’ve seen before. When Megg’s daughter (who looks a lot like Booger) finds a 7” EP by Horse Mania, it causes Megg to reflect back on her relationship with Jones.

The Aftermath of Jones

This isn’t the first time we’ve seen reflection on the late Jones. In the aforementioned “Xmas 2019,” Megg, Mogg, and Owl visit Jones’s grave, where Megg expresses her feelings of guilt about his death.

Meanwhile, in Crisis Zone, Owl bears the brunt of the guilt regarding the death, with the penultimate page of the story opening with a flashback to the late Jones dolled-up in his open coffin. Later, December image for the Crisis Zone 2022 Action Calendar depicts Owl, Jen, and the three Jones children mourning at Werewolf’s grave, with a caption that reads, “A trip to pay tribute to the Anus King! Here he lies, in his eternal slumber, beneath a blanket of snow…”

These stories show that those who survived Jones in both timelines feel his loss deeply, and personally. But in “7”,” we get to see a little further down Megg’s personal timeline, to a point at which she has grown to better accept the loss of Jones, and to celebrate the time they were able to spend together. This not only represents a significant step forward on the grand Megahex continuity, it also hints at some of what’s to come in Hanselmann’s promised forthcoming continuation of the story.

Hanselmann dedicates Below Ambition to the late Karl Von Bamberger.

“Karl was my angel, my songbird,” Hanselmann told Gary Groth in an interview for The Comics Journal #304, recalling the decade the real-life Horse Mania played “on-and-off,” working in a genre described as “Tasmanian ghost shitcore.”

In the interview, Hanselmann explained, “the ‘ghost’ was added after Karl died. I kept on playing Horse Mania shows with him participating as an iPod. I’d have the backing tracks and vocals, and I’d play along and sing my parts. But we were always Tasmanian and shitcore.” This tradition is honored with the included flexidisc single, which features the Horse Mania track “Stick it In for the Ambient” by Hanselmann and Von Bamberger.

The dedication to Karl in Below Ambition reads (in part), “one of the best friends I ever had.” This intimate connection and sense of loss informs every detail of the book, which uses its comparatively brief page and panel count to exclude all but the relationship between Megg and the late Jones from its aperture. The result is a moving portrait of a creative partnership with consequences that echo further than anyone could have imagined.

While the softcover is a departure in format from previous Fantagraphics releases of Hanselmann’s work, the book still includes the endpaper paintings and detailed, handwritten copyright and afterword pages Megahex devotees have come to expect.

Are you ready for Horse Mania?? Megg and Werewolf Jones make up the worst band in town and they are here to test your patience! Below Ambition is out 10/25 and includes a flexidisc single by Horse Mania, “Stick It In for the Ambient”—pre-order yours now! https://t.co/GnvX0eF37E pic.twitter.com/j64eu7E5Ne

The durable cover is especially appreciated, given that Below Ambition is the type of book that demands to be read repeatedly before a full appreciation of the text can be achieved.

Below Ambition is available now