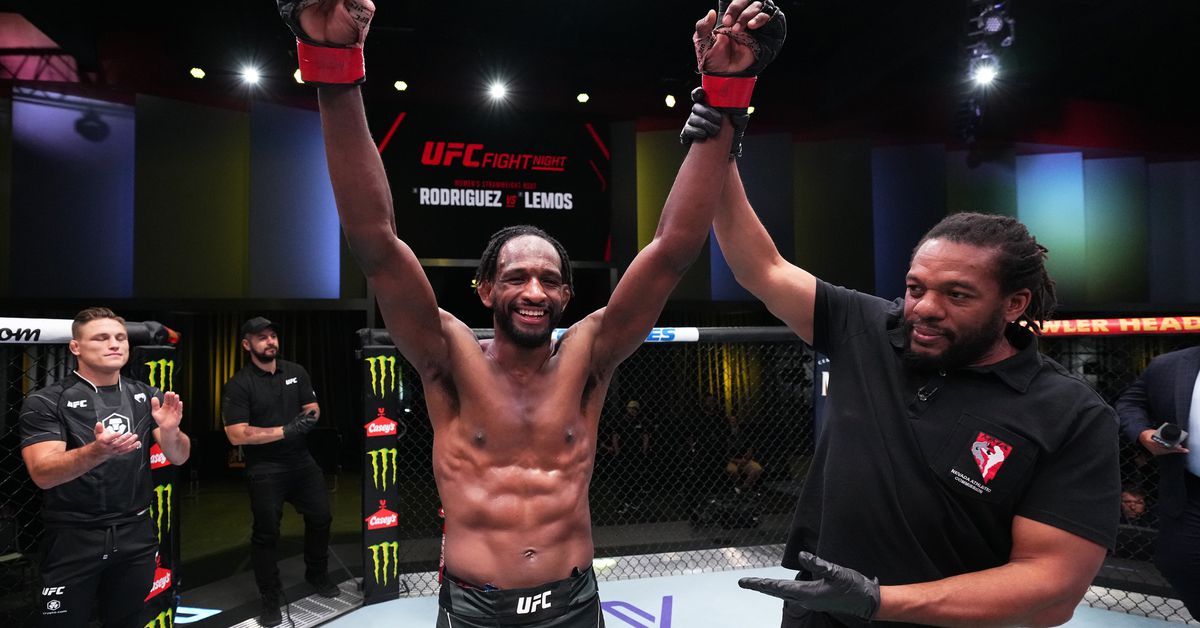 With a third round submission finish of Daniel Rodriguez on Saturday, Neil Magny became the all-time leader in wins in UFC welterweight history.

His 20th victory in the 170-pound division allowed Magny to surpass former champion Georges St-Pierre, who retired with 19 wins at welterweight on his UFC resume. Despite that accomplishment, he refuses to compare himself to St-Pierre because he’s still trying to define his own legacy.

“One of the biggest things I’ve had to come to terms with more recently is just appreciating the guys that came before me, and realize that I’m creating my own path in the UFC,” Magny said at the UFC Vegas 64 post-fight press conference. “It’s real easy to add the mental pressure both in the fight and after the fight is over, where you feel like you came up short or could have done better when you’re constantly comparing yourself to other people.

“I believe Georges St-Pierre is the greatest welterweight of all time. It was cool to be able to get to the point that I have the most wins [in welterweight history] in the UFC right now, but I just have to accept that his career is far different than mine. I can’t look at Georges St-Pierre’s career and look at what he’s done in the sport and feel like I fell short, or didn’t accomplish enough ,because that’s just added mental pressure that I don’t need.”

While Magny has remained a stalwart in the welterweight rankings for several years, he’s still hunting for his first opportunity to compete for UFC gold.

“This is a lot of pressure,” Magny said. “I feel like if I buy into the hype and constantly compare myself to GSP, when that day comes for me to walk away from it, I may have dark shadow over my head like, ‘You had an OK career, but you were no GSP.’

“I accept that. I know I’m not GSP. I’m Nel Magny. I’m comfortable with my own name in the history books and blazing a path for myself.”

If 20 wins at welterweight sounds impressive, Magny appears ready to add even more to his record, because there’s no chance he’s slowing down any time soon. In fact, he promises that his mission to fight for the welterweight title is still his top priority, which is another reason why he’s not getting lost in holding this current record.

“It’s great to be the all-time winner or whatever else, but at the end of the day, I want the stamp on my career,” Magny explained. “I want to be labeled the champion for the rest of my life, and that’s not something someone is going to give me. I have to go out there and get it.

“I do appreciate the win against Daniel Rodriguez tonight. I do appreciate holding the record for most wins in the welterweight division but that’s not the end goal for me now. Maybe five years from now, 10 years from now, I’ll look back like all right, that was good enough. But right now, I still want to be called UFC welterweight champion and I definitely feel like I can get it done.”

Ideally, Magny would like to take a step forward in the division with his next fight. He asked for a matchup against Gilbert Burns at the upcoming UFC 283 card scheduled in Brazil on Jan. 21.

After losing to Shavkat Rakhmanov in a previous outing in which he got finished by submission, Magny wants the chance to face another high-level grappler to prove he’s made dramatic improvements in that part of his game.

“If you look at my last fight, I lost via submission and it was a very frustrating loss for me,” Magny said. “Gilbert Burns, in my opinion, is the best grappler in the division right now. So for me to go out there and test myself against another great grappler shows all right, am I just going to chalk up my last fight, it’s a loss, you can learn from it and move on, or am I just going to say I had a bad night in the office and have an excuse.

“I feel like I did a lot of growing in that fight against Shavkat, and I feel like challenging myself against a good grappler in Gilbert Burns is just going to go out there and show it. I guarantee it will be an exciting one either way.”