Marina Rodriguez: UFC Vegas 64 fight with Amanda Lemos ‘doesn’t make sense,’ next bout ‘has to be for the belt’ -
Skip to content 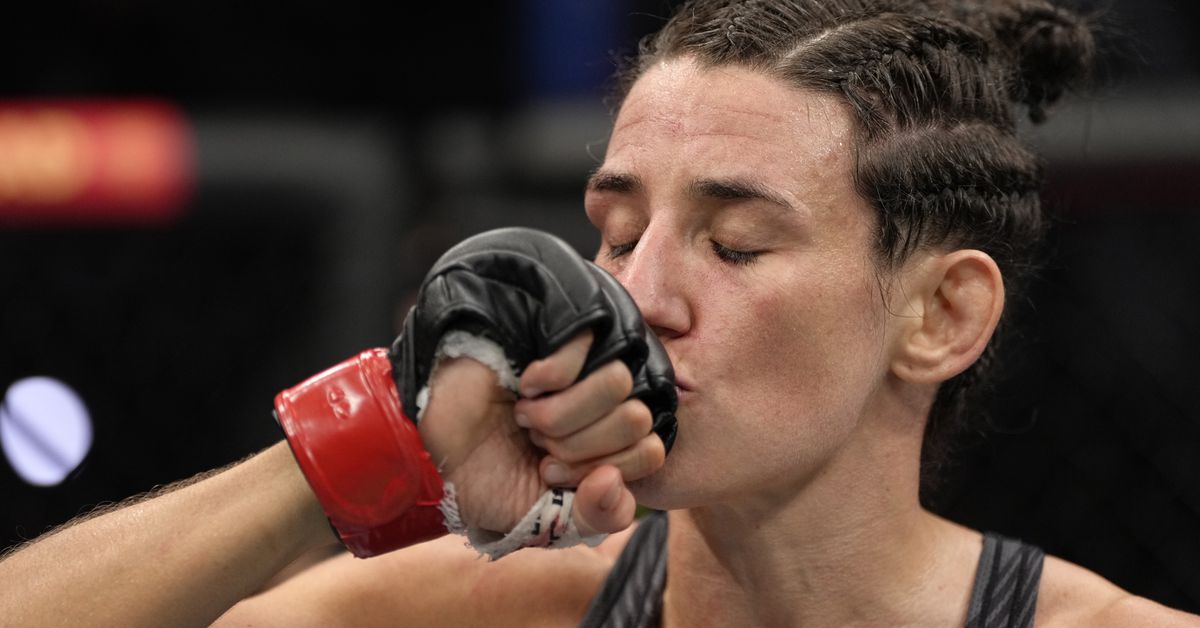 Marina Rodriguez is on a four-fight winning streak going into UFC Vegas 64’s main event Saturday night against Amanda Lemos. She embraces the headlining spot, even if she sees no logic in the matchmaking.

Speaking on this week’s episode of MMA Fightings’ Trocação Franca, Rodriguez said the Lemos matchup is “a fight that doesn’t make sense.” But, she added, “as a good employee of the company, [I] am well-prepared to face [Lemos] and walk through another challenge to get where we want, which is the belt.”

Lemos submitted Michelle Waterson-Gomez with a guillotine choke this past July to rebound from a quick loss to Jessica Andrade in April. Rodriguez delivered previous wins over Waterson-Gomez, Mackenzie Dern, and Yan Xiaonan, and hopes to go 5-0 since 2021.

According to Rodriguez, the UFC originally offered a clash with former champion Zhang Weili at UFC 275 in Singapore this past June, but she opted against taking it on a month’s notice. Weili ultimately knocked out Joanna Jedrzejczyk on that card to earn a shot at strawweight champion Carla Esparza at UFC 281.

“I had some injuries after the Yan fight, like everybody does,” Rodriguez said. “Doing three tough rounds against a tough opponent, we needed more time.”

Taila Santos, who at the time trained with Rodriguez’s team, was scheduled to be on the same card against flyweight queen Valentina Shevchenko, making things more complicated for “a small team” like hers.

“We said we’d do it, but to push it back one or two months,” Rodriguez said. “The UFC said no, it had to be on that date in Singapore. And since we asked for more time, they said no and put Joanna in.”

When the Lemos match was offered on Oct. 22, Rodriguez felt she “had to accept,” or she would be turning down another fight. Rodriguez vs. Lemos was then pushed back two weeks and elevated to the main event spot of UFC Vegas 64.

“Like Dana White says, timing is everything,” Rodriguez said. “I really lost that Zhang timing, but I don’t regret it, because we needed more time to put on an excellent fight against a former champion. We don’t do things any which way.

“There were times we took fights on short notice but the odds favored us,” she continued. “But, in this case, it felt like a trap, to go there and make sure Zhang won. To do that over me? I needed more time to prove that wouldn’t be so easy. But it’s in the past. I don’t case because we’re still seen by the UFC, and that’s why they offered us another fight so quickly.”

Rodriguez said she’s used to taking steps back, ranking-wise, and will prove Saturday she’s ready for the top of the division. She’s aware that Lemos is not an easy foe.

“Perfect scenario is myself winning [against] Amanda Lemos, and, [regardless of whether] Dana White [is] saying or not saying I’m next, I’m going to be the next [for the belt],” Rodriguez said. “I’ll be sitting front row in New York and doing everything it takes to be seen and heard.

“The real perfect scenario is me getting my rematch with Carla Esparza. It’s the only loss of my career, and by split decision, in a very close fight, but everything [points] to Zhang Weili winning this fight. I just want my opportunity, no matter who I’m fighting. Carla or Weili or anyone else on my way, but it has to be for the belt.”