Jared Gordon refuses to discount Paddy Pimblett as nothing but hype: ‘I am not underestimating him whatsoever’ -
Skip to content 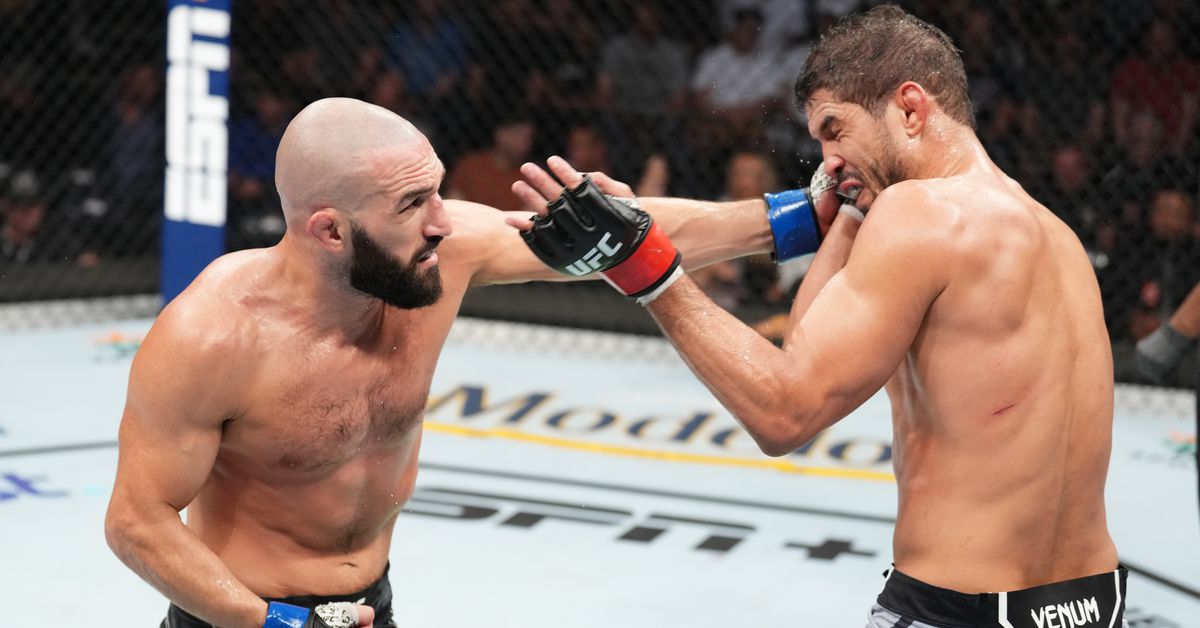 It could easily be argued that one of the biggest mistakes many of Conor McGregor’s early opponents made was believing he was more hype than reality.

Sure, he burst on the scene making bold proclamations that he would become a UFC champion sooner rather than later. But McGregor consistently backed up everything he said inside the cage.

These days, Paddy Pimblett has taken up the mantle as arguably the most hyped fighter on the UFC roster, with an outspoken attitude and a growing fan base that loves to support him rather loudly. He’s also put together a perfect 3-0 record with three straight finishes in the UFC. But he’s faced similar backlash as McGregor that perhaps he’s a product of promotion rather than a legitimate contender.

Jared Gordon, who faces Pimblett in his next fight at UFC 282 in December, refuses to play that game just because “Paddy the Baddy” is getting so much attention these days.

“Listen, a fight’s a fight,” Gordon said on The MMA Hour. “He goes for it on the feet. I think he’s more dangerous on the feet than people give him credit for and he’s tricky. He’s unpredictable. He has three finishes in the UFC right now and he’s on a big streak. Anything can happen.

“I think he’s more well prepared, and he has a lot of support, and he has the money now to afford to have nutritionists and other coaches and traveling for training and new ideas and new people. Sometimes all you need is a little tweak in your game, and all of a sudden, things change for you in a good way. I am not underestimating him whatsoever. I think it’s going to be a fun, tough fight.”

If there’s been a criticism haunting Pimblett since signing with the UFC, it’s that he hasn’t faced better, more established opponents but it’s also quickly forgotten that he’s only approaching his fourth fight with the promotion.

That said, Gordon believes he’ll offer a totally different kind of challenge, and Pimblett will get the opportunity to prove if he’s real or not.

“He’s had three fights, he’s 3-0 with three finishes, and he’s got to get a step up eventually, right?” Gordon said. “I think with our backstory, we’ve been calling each other out, it just makes sense at this point.

“I fought his teammate Chris Fishgold before Paddy was even in the UFC, so when he got signed he named like three or four guys [he wanted to fight] and I was one of them, [he said] ‘I would like to get that one back for my team.’ Then every time after we fought, however many times it’s been for the both of us, we’ve been calling each other out. It’s a good storyline. Time for a bump in competition.”

Pimblett hasn’t shown any fear stepping into the fire during his UFC fights, including his octagon debut, where he went toe-to-toe with Luigi Vendramini before eventually earning a first-round knockout.

He’s also wrapped up back-to-back rear-naked choke submissions in his past two fights, which have highlighted his considerable grappling skills.

For his part, Gordon isn’t going to try and predict where his fight with Pimblett will go, but he’s staying ready for any possibility once the fists start flying on Dec. 10.

“He’s come in and do what he says he’s going to do,” Gordon said about Pimblett. “He’s had some adversity in his fights, and he’s shown that he can overcome some adversity and comeback and win. Now, I’m not saying that his opponents were the best fighters ever, but still [there was] a lot of pressure on him to go and perform. He did what he was supposed to do. He’s done his job.

“He’s unpredictable. He goes for it. He’s supposed to be a grappler but he goes for it on the feet, too. This is a mixed martial arts fight, and he has a lot of fights. It’s not like he only has 10 fights. He’s got only two less fights than me, so it’s not like he’s inexperienced in that sense. He just doesn’t have as many UFC fights. I’ve seen a good deal of them.”

Gordon confesses that he’s never been very good at predicting how his fights will play out, so he’s not going to try and call his shot against Pimblett before they actually clash. If he had to venture a guess, however, he is confident he’ll be able to do to Pimblett what he’s done to so many past opponents.

“Any time someone asks me what do you think’s going to happen? I’m going to go out there and get the guy tired and grind him out and kick his ass. That’s how a lot of my wins have gone.”