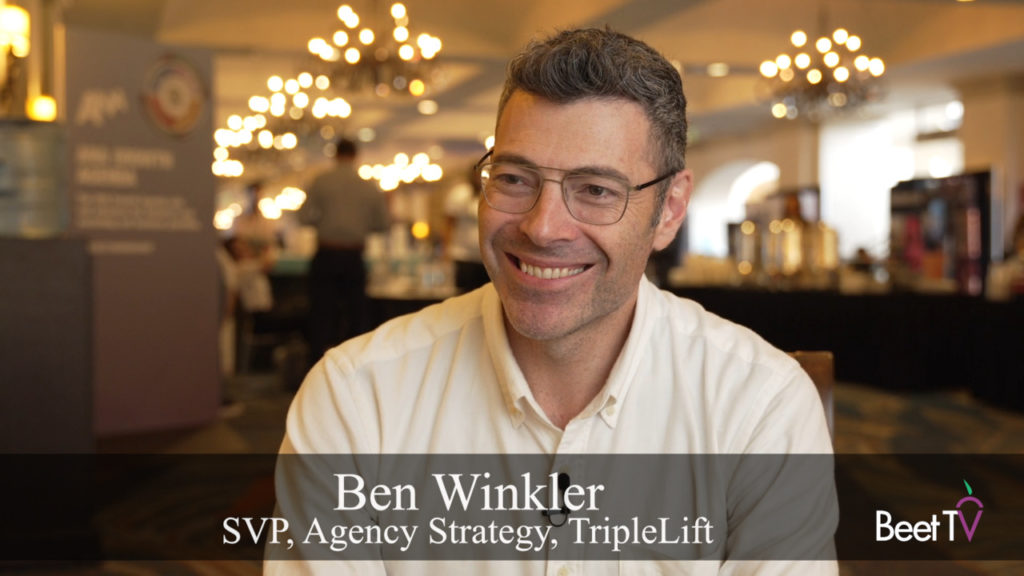 ORLANDO — By now, most people understand that “native advertising” means an ad unit presented in a seamless way that fits both the aesthetic and the experience of the container channel.

But how can “native” work in TV when the content, by definition, changes on a second-by-second basis?

It’s all about the re-application to connected TV(CTV) of software first built for the web.

“We have something called computer vision technology that scans each … site… and then renders that ad so it looks like it belongs in that content,” Winkler says.

“The cool thing is that we take that same philosophy and now we’re bringing that to CTV.

“Using that same concept of computer vision, (we are) finding the places where products can be inserted, or you can get the split-screen experience like when you’re watching football and there’s a timeout and you get the action in one corner and the ad in the other corner, creating inventory where none was there before.”

For Winkler and TripleLift, it’s about adding in new ad inventory options for a medium, CTV, whose user experience demands fewer ads per hour than traditional broadcast.

TripleLift’s technology lets a brand can take a single set of creative assets and turn them into tens of thousands of unique native ads, each one tailored to each specific publisher.

It has also developed a host of new ad formats for TV companies to offer, including:

Winkler acknowledges that adding new inventory modalities in the content itself raises questions that need answering, questions like: “Is putting advertising in the content, is that annoying? Is it alienating or is there an additive effect?”

Having carried out studies, he says: “It turns out that people are not annoyed by this advertising.

“In fact, you get a one plus one equals three effect when you combine it with the regular spot during a commercial break as well.

“Seeing the product or promotion within the content primes the consumer to then respond better when the actual ad itself with a full message comes in there.”

You’re watching “Assessing TV Performance in a Changed Landscape,” a Beet.TV Leadership Series produced at the 2022 ANA Masters of Marketing, presented by EDO Inc. For more videos from this series, please visit this page.