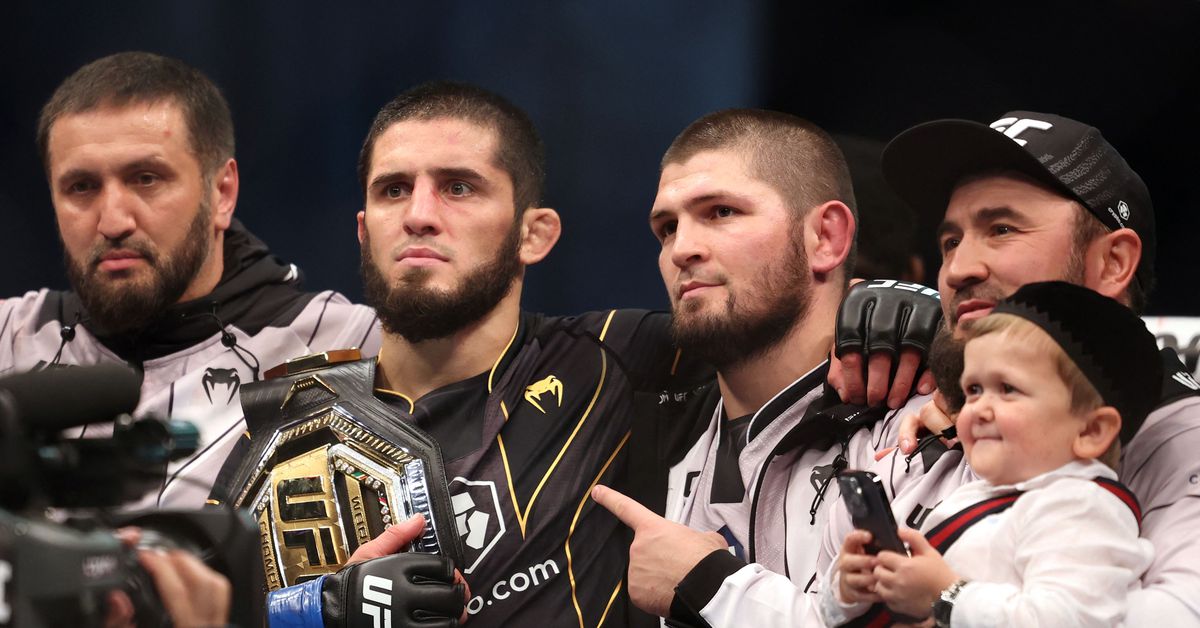 It’s been a quiet couple of weeks in the world of MMA. Sure, there was a Fight Night card last weekend and we’ve got another tonight, but in general the sport still feels like it is recovering from UFC 280 and/or gearing up for UFC 281 next weekend. So on that note, we’ve got a bit of a mixed bag of questions this week to get to, so let’s jump right in.

Did Dana float Cejudo as a possible opponent for Sterling because of perception of O’Malley’s win? Did he forget what happened 2019-2020 with Cejudo holding the belt?
(Not to mention Cejudo might need at least a contender fight first, but we both know how the UFC operates)

I have three theories as to why Dana White threw out Henry Cejudo as the potential next title challenger for Aljamain Sterling, and honestly, I could see any one of them being true.

Since Islam has talked about a possible move up to welterweight in the future (hopefully after cleaning out his division, unlike Volk), who would you favor in a fight between Islam and Khamzat?

First off, this fight is never going to happen. I don’t think Khabib would ever allow it to in the first place, but moreover, the timelines simply do not match up. Makhachev is not going to move up to welterweight for a couple of years (if he can hold onto the belt for that long — he may, but lightweight is a friggin’ shark tank) and Chimaev has at best three fights left in that division. When a guy misses weight by nine pounds, that’s a pretty good indication he’s not long for the weight class anymore. In Chimaev’s case, that’s especially true because he is pretty clearly only staying at 170 get the welterweight title achievement unlocked. I suspect that should he win the belt (either from Leon Edwards or Kamaru Usman, I favor him in both fights), he will almost immediately move up to middleweight for good. He’s too big for 170 and too talented to feel like he has to compete against substantially smaller opponents.

That being said, in your hypothetical world where this fight does take place, you have to favor Chimaev. The size difference is simply too big to overcome. Makhachev is tremendous, and may well go down as one of the greatest fighters of all-time when his career is finished, but that’s a lot to ask of him to overcome, particularly when he is only a good athlete, not a great one.

While the natural comparison for Makhachev is Khabib, they are not the same fighter. Islam is a the more defensively sound fighter, but he’s a much worse athlete than Khabib, and that makes all the difference in the upper echelons of the sport, particularly when you’re talking about bumping up weight classes. I’m on the record as saying that Khabib Nurmagomedov could have beaten Israel Adesanya, and for as good as Makhachev is, he’d stand no chance. He doesn’t have the raw horsepower and explosion to make up the gulf that Adesanya’s size advantage would create. It’s the same thing for Chimaev.

With skills being equal or at least comparably similar, and one guy being much bigger, faster, and stronger, you go with the better athlete 10 times out of 10.

Early thoughts on Adesanya vs. Pereira? I’ve watched every fight I could find on both fighters from mma and kickboxing and I know Izzy is super slick, but Poatan only needs to catch him with that left hook one time clean and it’s a wrap, right?

Adesanya should win, but I have this sneaking suspicion that we’re going to hear “And New” at UFC 281.

Adesanya is the more defensively sound and technically proficient striker of the two middleweight kickboxing gods, but Pereira is undeniably the more dangerous. That man carries power we’ve rarely seen in MMA. Just watch him punch people. He puts no effort into it and dudes look like they got smacked with a sledgehammer. It’s incredible, honestly. And that’s the most dangerous kind of power, because he doesn’t have to sit down on it, or wind up — he’s just got to find a home, one time. Do you know how hard it is to not get hit in a fight? It’s impossible! Everyone gets hit (except Islam Makhachev, apparently).

And that’s where I think Izzy has a huge problem. For as good as Adesanya is, his tendency to value defense above everything is actually extremely risky (I know that sounds backwards, but follow along) because by refusing to accept a slight increase in short-term risk in order to pursue a finish, it means Adesanya’s opponents have 25 minutes to land the big shot, instead of just 10 or 15. And giving Pereira 25 minutes to find the mark is playing with fire. Can it be done? Maybe. But we’re talking an Alex Honnold level of perfection Adesanya is putting on himself in this fight, and trust me when I say that Pereira is just as dangerous as El Cap.

There’s a wealth of British talent atm with Edwards, Allen, Pimblett, Aspinall, Till and McCann amongst others. Who do you see potentially being the best of the British invasion in years to come?

Maybe this is a touch disrespectful to Leon Edwards, who is the true and rightful welterweight champion of the world (I’m going to pick him in the trilogy with Kamaru Usman, by the way), but I think Leon is on borrowed time here. He won the belt, and that’s incredible and can never be taken away from him, but I would be stunned if he managed to defend it more than a couple of times. Welterweight is too good, too deep, and there are too many tough fights for him.

Aspinall though, that man looks like the real deal. Now, there’s the huge caveat for him coming off the horrible knee injury and maybe he won’t be the same in his return, but if he is, this man seems destined to win the heavyweight title. He’s so well-rounded and very athletic, and Curtis Blaydes will never get a title shot because the UFC has no interest in giving that man the belt, so Aspinall even has mostly favorable matchups in the division. Plus it’s heavyweight so he can hang around for a decade-plus. Leon isn’t fighting for another 10 years, so give me Aspinall to be the standard bearer of the future.

Also, shout out to Arnold Allen. I wish he was getting his chance to fight Alexander Volkanovski because I think he has a chance to win that fight, but instead he’ll be forced into another bout at least before finally getting his title shot. Still, I think Allen is a top-3 featherweight in the world, and being so young, he’s probably going to be in our lives for some time.

Thanks for reading and thank you for everyone who sent in Tweets! Do you have any burning questions about things at least somewhat related to combat sports? Then you’re in luck, because you can send your Hot Tweets to me, @JedKMeshew, and I will answer them! Doesn’t matter if they’re topical or insane. Send them to me and I’ll answer the ones I like the most. Let’s have fun.