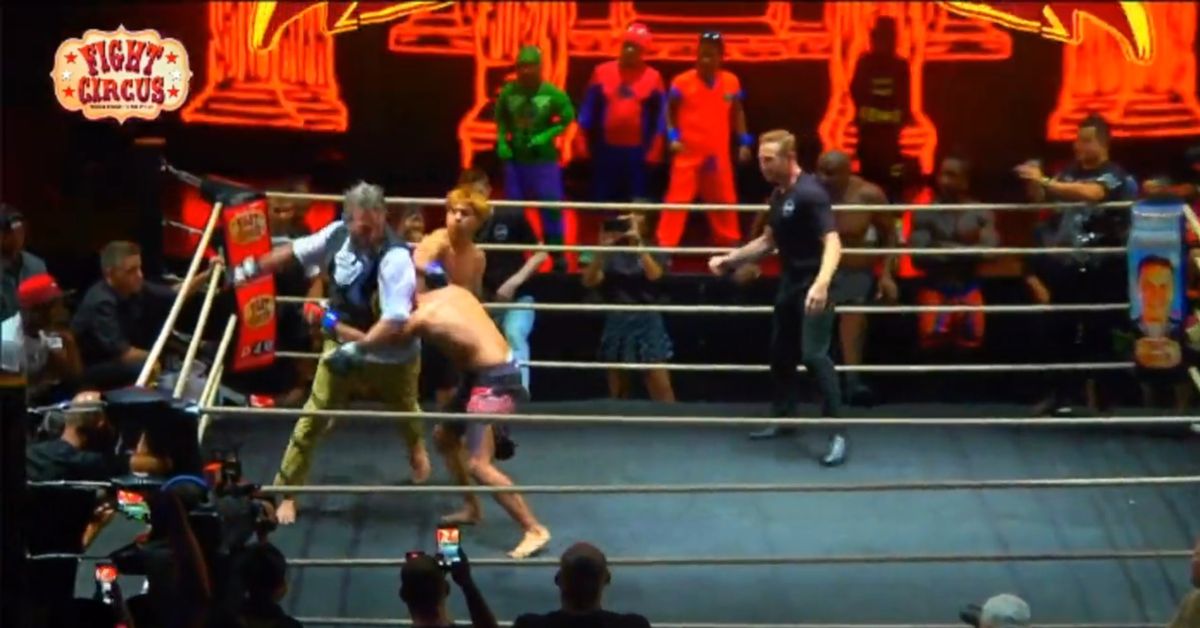 Jon Nutt’s Fight Circus promotion faced a number of setbacks, then the man himself faced his own insurmountable challenge in the main event.

At Fight Circus 4 in Phuket, Thailand, on Sunday, Nutt fell in a 2-versus-1 fight against “MMAsymmetrical” champions Bank and No Money. The two were coming off of a loss to former UFC fighter Will Chope in November 2021, but returned to the win column in convincing fashion after defeating Nutt not once, but twice.

Watch video of the headlining handicap match above.

Nutt, who also served as the host of Sunday’s show, went right at the pair to start the contest, but was quickly overwhelmed as Bank and No Money resorted to their tried-and-tested tactic of having one of them go for a takedown while the other throws strikes. The larger Nutt was able to toss his opponents aside and even landed a soccer kick before eventually being overwhelmed and submitted with a rear-naked choke.

However, in a not-so-shocking twist, Nutt was given a second round to fight the champs after it was announced that they had missed weight and were obligated to grant an immediate rematch (an announcement that contradicted a video posted by promoter Full Metal Dojo a day earlier).

Nutt again came out swinging, but Bank and No Money teamed up to batter him with strikes to secure another victory.

It was a fun end to an event beset with difficulties, beginning with a two-hour delay to the show that was caused by the truck transporting the ring to the venue being involved in an accident, according to the broadcast.

Once the show started, it kicked off with a promo from Jon Anik — yes, THAT Jon Anik — and an intro parodying Saturday Night Live.

“Prepare yourselves because the fastest growing sport on the planet is about to get a whole lot slower, dumber, and fatter, as Jon Nutt and the team at Full Metal Dojo — the global leader in circus fights — unleashes a brand new type of stupid onto combat sports fans around the world.

“The pinnacle of freak show fighting is here, folks, bringing the spectacle and the satire to the entire sport. Fight Circus is live from Phuket, Thailand, and you should go there. I award you no points and may God have mercy on your soul.”

The show featured a number of other attractions and oddities (plus some straightforward athletic contests), most notably a “Siamese kickboxing” bout that featured kickboxers competing against one another in teams of two while joined together by an oversized shirt.

Amazingly, the fighters actually managed to show off some effective technique despite the bizarre setup, and the contest was ended by a beauty of a right hand from the “Mecha-Petzilla” team.

The Fight Circus 4 lineup also featured a surprisingly respectable “Boardroom Brawl” between supposed high-rollers David Armitage and Denver Jackson, a three-round “Wheel of Violence” bout in which each round would be contested under a different randomly decided ruleset, and something called “Domestic Pancrase” (or “Living Room MMA”) that featured furniture scattered throughout the ring.

For a full rundown of the latest Fight Circus craziness, you can catch a replay of the event free on FITE.