Daniel Cormier says he should have retired after Derrick Lewis fight: ‘I was so severely limited it was crazy’ -
Skip to content 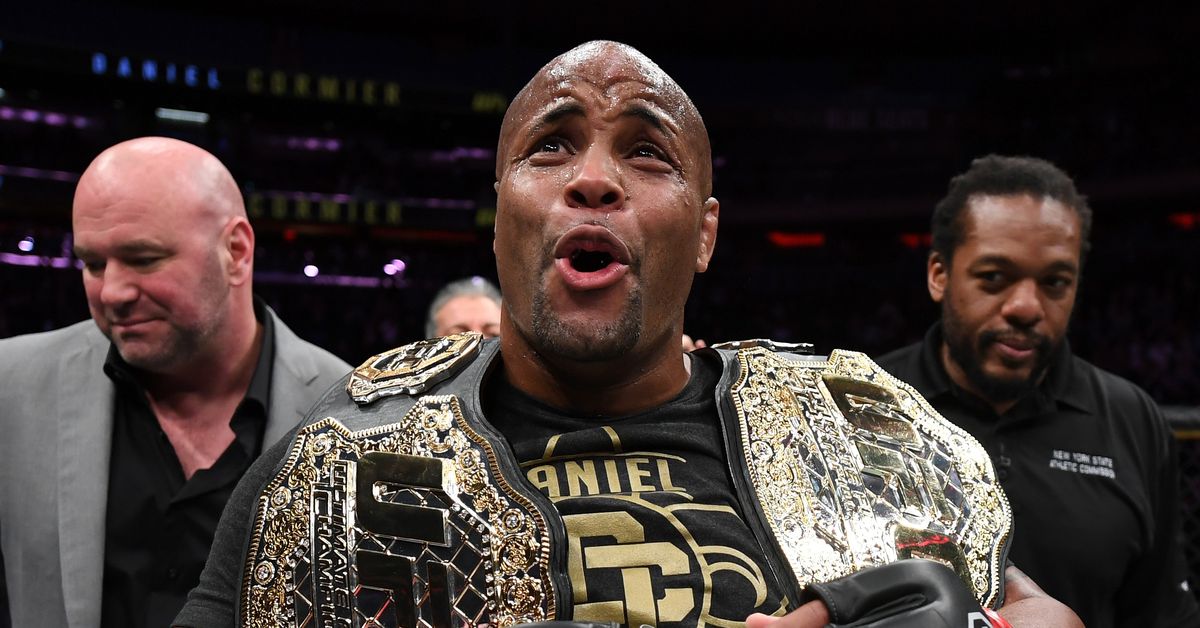 Daniel Cormier wishes he had hung up his gloves a little sooner.

One of the most accomplished fighters in UFC history, Cormier is one of only three fighters ever to win and defend titles in multiple weight classes. He retired in 2020, following his trilogy bout with Stipe Miocic, but looking back on it, Cormier wishes that trilogy never took place.

“I can’t train to fight the way I want to fight,” Cormier told Ariel Helwani on The MMA Hour. “Me fighting Stipe Miocic after my back surgery, those two times, that wasn’t the same fight. I couldn’t wrestle! I should’ve stopped in ‘18. I should’ve stopped in ‘18. I should have retired after Derrick Lewis. Especially when I had back surgery. I was so severely limited it was crazy. My wrestling workouts, I went from wrestling 30, 40 minutes rounds and matches to doing ropes and jump-roping and doing wrestling movements without the physical contact of the wrestling. It was crazy. I couldn’t wrestle like I wanted to…

“I had surgery in December after Derrick Lewis. I blew my back out the morning of the fight. I should have just said, ‘I thank God, and I’m out.’ I got this extra money, I’m still the champ — I don’t think they’d even taken the light heavyweight belt from me yet, because Jones and [Alexander Gustafsson] fought at the end of the year. I could have been done, but I just didn’t.”

For years, Cormier drew a hard line for retirement at his 40th birthday, however, when that date neared in 2019, he ultimately chose to continue on, rematching Miocic at UFC 241 where he lost by fourth-round TKO. That led to their trilogy bout where Miocic won a unanimous decision in a competitive bout, with some minor controversy due to an eye poke by Miocic. Cormier doesn’t put much stock into that, but he does maintain that his rematch and trilogy against Miocic showed that his body couldn’t compete anymore.

“I don’t know if I almost won, honestly,” Cormier said. “I was winning the first round, then the second round I was winning but then he dropped me. Then the third round he dropped me and I’m having to take a round off to recover. Third round I got poked. Fourth round I won the round, and then the fifth round he just kept clinch me. He won the fight, and I’m not one of those guys who is going to sit here and lie. Dude won the fight. But, dude wouldn’t have — I don’t think he ever would have beaten me when I was younger and I was doing everything. I was just a better fighter.”

Ending his career on two losses was not the only unfortunate result of continuing to fight on though. The trilogy bout with Miocic took place on Aug. 15, 2020, during the height of the COVID-19 pandemic and the UFC’s safety protocols, meaning that instead of finishing his career in front of a sold out crowd at Madison Square Garden as the double champ, instead Cormier’s final fight took place in a nearly empty Apex arena, with only his wife and his longtime coach there.

“That was crazy. It was right in the middle of the pandemic, with no one there,” Cormier said. “And that was the problem, nobody could be there. My family, nobody was there. Nobody got to go. They let [my wife] Cassandra and [my coach] Rudy in… It was just them sitting in the middle of the Apex and nobody else, and that was them doing a thing for me because of what I had done for the company.”

Though his career may not have ended exactly as he wanted it to, Cormier still had one of the most impressive careers in MMA history, and was inducted into the UFC Hall of Fame in June, alongside teammate and friend Khabib Nurmagomedov.