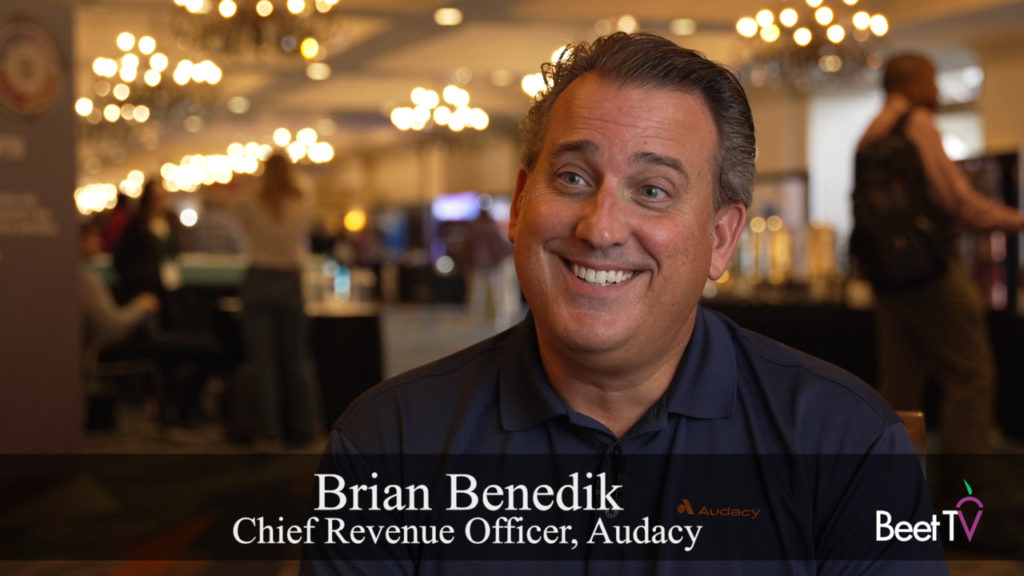 For a few years, audio advertising sat on traditional radio’s sidelines, while video surged ahead in capabilities and spending.

But that has changed, thanks to recent developments in technology and consumer behavior.

“Audio’s caught up to video,” Benedik says. “We didn’t have programmatic channels, we didn’t have very good targeting of audience or attribution on the back end. That’s all over the place now, so that’s what excites a lot of the folks here.”

Benedik is a former sales SVP at Spotify, which he credits with working together with demand-side platforms to build out the kinds of digital audio programmatic ad infrastructure that has now spread beyond Spotify alone.

“It gives the marketers here so many options, whether they want to work with us on a direct IO basis or on an automated basis.”

Audacy is the former Entercom Communication. Last year, it changed its name in a corporate rebranding. The company reaches 200 million U.S. consumers through radio broadcasts and more than 60 million people through audio streams.

Entercom was founded in 1968 and counts more than 230 radio stations in its portfolio. In 2017, it merged with CBS Radio, giving it use of Radio.com.

That became its key asset in digital audio distribution, and for making an advertiser offer than can leverage first-party listener data.

“It’s become much shorter. The 30- and the 15-second audio unit has really taken over. A consumer doesn’t want to hear a 60-second video or audio unit. Even there’s a lot of experimentation with five-second audio units.”

“Testing a lot of different creative is something that’s hot now too. ‘Hey, let’s beta test this versus that’. You’ve got three or four sets of creative that can be activated and one is going to provide a much different return than another.”

“You’ve got companies out there that are really specialising in various audio creative. As the medium has become much more personalized and much more one-to-one, being able to serve a specific audio ad to you, a different one to me – that’s real now and very exciting.”